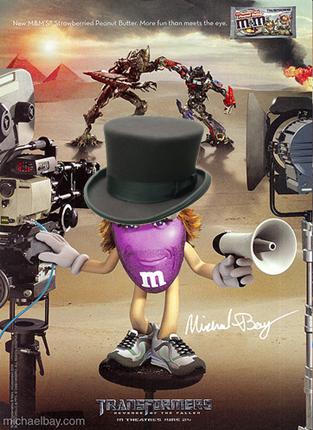 Michael Bay first made his appearance into my life when my better (and crazier) half, Mary Todd, decided to audition to play a role in his upcoming rendition of the once popular animated show Transformers. Although Megan Fox ended up getting the part, Mary Todd still had to go through quite the ordeal through the course of her audition. Here’s what I remember.

We showed up at Mr. Bay’s house at three in the morning, as requested, and waited at his doorstep to be let in. Eventually, after making us wait for a good twenty minutes (I suggested we leave, but Mary Todd really wanted this opportunity), he arrived at the door wearing a distressed leather jacket and golden aviators (even though the sun was hours from rising) and waved us to the back of the house. The man was standing less than a foot away from us, knew he had kept us waiting, and did not feel the need to even audibly say let us go out back, rather he just waved. Although I was already in a mood much like when I found out Robert E. Lee was going to betray me,* Mary Todd was still ecstatic to audition for her hero, so I kept my mouth shut.

Out back, there was an apple red Ferrari parked upon an almost beautiful stone driveway (when looked at closely, the stones were in the pattern of the Mountain Dew logo, a fact that still confuses me) with a wooden porch looming a couple stories overhead. Mr. Bay was on the porch, staring down at us. His staring continued for a good thirty seconds. After that was thankfully over, he instructed Mary Todd, who I cannot reiterate enough is crazy, to strip to only a bra and underwear and begin washing his Ferrari. Although I wanted to object with every molecule in my humble and long-legged body, I knew how much this meant to Mary Todd.

This meant so much to her sweet, sweet face

After stripping down and filling a bucket with soap and water, Mary Todd began scrubbing Michael Bay’s car. At first the situation was only mildly bizarre, trust me I have seen Mary Todd do far crazier things in my day, but soon the audition escalated to even new heights. When Mary Todd got to washing the front of the car, which was right below the ledge Michael Bay was leaning over, Mr. Bay pulled out a house and started pouring it upon my wife while whimpering little noises out of that giant mouth of his. Although I should have expected this, Mary Todd had no objections to this and instead started to whimper even louder than Michael Bay. This continued for longer than I care to mention.

When Mary Todd finally finished washing Michael Bay’s apple red Ferrari, Mr. Bay stared us down, once again, only this time lasted at least four minutes. Finally, Michael Bay pulled out his signature bullhorn and whispered “You didn’t get the job.” He then disappeared into his house, blew up his deck, then the apple red Ferrari that Mary Todd had just crawled away from in tears, and then finally the house blew up as well. Michael Bay then appeared out of the smoke and rubble, straddled upon his Kawasaki Ninja 250R motorcycle riding up to our beyond shaken and ash-covered bodies huddled together on the ground. After staring us down, once again, he yelled “explosions!” at the top of his lungs and peeled away going a hundred miles per hour into the distance.

Michael Bay is so uncool

*This does not refer to when I found out that Robert had turned down our humble offer to lead the Union army due to a previous commitment with the devil, to be honest I somewhat expected that. Rather this refers to when that vagabond betrayed my trust in a heated game of RISK with Thurgood Marshall, Cornelius Vanderbilt, and the always adored Benjamin Franklin.